(Disclaimer: I’m not a financial consultant, I don’t own WSG shares. I’m just a former tech exec who worked on 8 acquisitions inc. a $2.4 billion dollar one. I don’t use affiliate links and receive no benefit from anything on this page.)

Shares of Wanda Sports Group (#WSG) opened up slightly today and are currently $2.83, off a close yesterday of $2.78 after their 3Q earnings report, and the filing of a shareholder activist group, class action lawsuit. 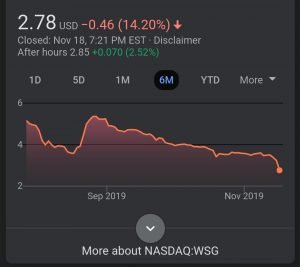 The $2.78 share price in finance terms knocks almost $100-million off the market cap of the company, and while their revenue is up, it’s not a good look to be adding more debt to their balance. Yahoo finance has the details on this, as does the Seeking Alpha report linked from last weeks post, but ahead of their 3Q results.

The Class action suit would normally be something a company would want to settle fairly quickly, to get the “monkey off its back”. A quick payout, add to debt, which with current interest rates low, is no big deal. However, in some cases, it’s worth deliberately dragging out the suit. In this case I’m torn, with a dropping share price getting it off its back would seem prudent, but having already had one buyout/takeover approach from the PTO having it around their neck as a dissuader to more buyout/takeover bids, could be a useful strategy.

Either way, with the share price tumbling, the PTO and it’s backers have saved themselves money.  It’s not clear what will happen next.

What does this mean? The class action lawsuit alleges, effectively, that Wanda deliberately overvalued and overhyped WSG at their IPO. With the share price falling and the class action lawsuit, WSG will want to do something to address the share price and try and pump it up. That would achieve 2-things, 1. address some of the claims in the lawsuit, and 2. make it more expensive to acquire. They have very few tools to do that with.

As per their 3Q earnings report, they’ve made a number of changes to the Rock and Roll marathon/half series that they expect to pay off next year, including jacking up the entry price by $31 from $99 to $130. This weekend sees effectively the end of the 2019 Ironman race series with Ironman Cozumel and Ironman Arizona. Both will start accepting entries for the 2020 races. If there is to be any shift in Ironman race entry fees it’s likely to happen then for the full year 2021.

Cost cutting. The other way WSG can improve the balance sheet is to cut costs or add races. Adding races adds expenditure, and doesn’t mean they can make money. For Ironman races at least, apart from sponsorship, the revenue is dependent on what the host city is willing to pay plus entry fees. On the expense side, if Ironman can put a race on the schedule near one of its existing regional division HQ’s and can re-use the equipment thats a good thing. The big expense apart from setup/teardown/shipping is then the Ironman Foundation.

The Foundation is an interesting financial vehicle. Cities pay Ironman to hold the race; Ironman puts money into the Foundation; The Foundation pays local groups for their volunteering; Ironman bigs-up the contribution its making to the local community in sales tax and charitable grants. This overlooks the fact that what Ironman pay for volunteer hours is way less than minimum wage. I assume takes a write-down on taxes for the donation to the foundation?

Far from cutting races, it looks like today we will see the announcement of another new US race, possibly Ironman Memphis. [Edit: 11/21: In fact it’s turned out to be a 70.3 race.] 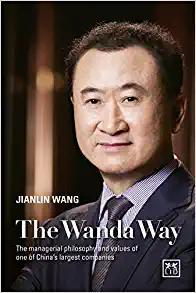 WSG will have to do more than they announced yesterday in their 3Q earnings, but what? Will the PTO comeback for a 2nd bite at a buyout of just Ironman, or if the WSG share price continues to drop, will WSG become a target for a buyout/privatization and restructuring? They’ve done their IPO stock payouts to Executives, and have $186 million cash in hand.

Either way, “The Wanda Way” isn’t looking so good unless its taking money from stockholders.