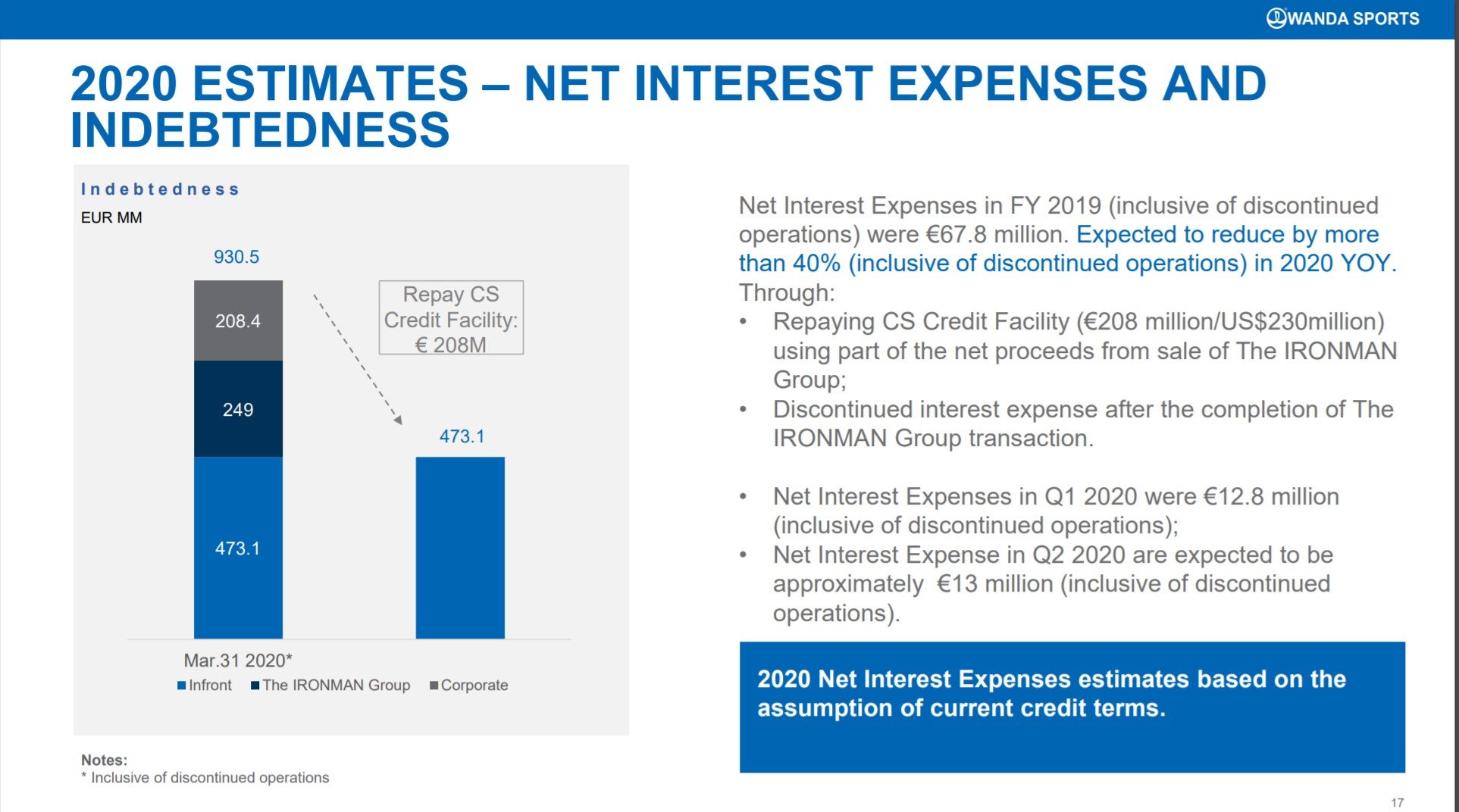 Wanda Sports held their 1Q2020 quarterly results announcement on Tuesday (6/9) and the market has been less than impressed.

They moved Ironman Group, aka the WTC, off the main part of their books and re-did all the accounting to show results without them. $WSG initially saw a brief rise in share price, following summaries like “Wanda Sports up 3% after Q1 results beats on Revenue“, they soon settled back to be down on the week and still trading about 1/3 of their IPO value.

Officially since the Ironman Group is almost a closed sale, in accounting terms they moved their value, results etc. into a classification called “asset held-for-sale”. Essentially this allowed Wanda to ignore the collapse in their results and show it as discontinued operations.

“the closing of the IRONMAN sale to occur by end of the second quarter.“

Later in the call, Liao said that Wanda expected
“to receive net proceeds about €345 million to €363 million cash from the IRONMAN sale” and “to use a part of our proceeds from the sale of the IRONMAN Group to repay some of our debt“.

At the end of the call, as is customary, the executive took questions from Financial Analysts, Alan Gould from Loop Capital essentially posed the question

“The question is regarding the sale of the IRONMAN, I was wondering what are the — you said the timing is the second quarter. Are there any hurdles remaining to have that deal sold, is there any change in the price. And then once the IRONMAN is sold, do you have some sort of target leverage ratio. How should we think about how much cash you want to keep at the Company versus how much you might want to return to shareholders?“

To which CEO Yang replied
“we don’t see any hurdles, both parties are actively prepared for the closing. The only thing, we’re waiting is the government clearance of the antitrust filing. We still have one country, there are four countries and we got three clearance. There is one country which we’re still waiting for and we expect to get that clearance any time from now to end of June, could be early July. And the government approval slowdown a little bit in the Europe country because of the pandemic. So, and the team are all working preparing the necessary in the document for the closing.”

So the sale of the Ironman Group aka The World Triathlon Corporation, looks to be close in the next 6-8 weeks, possibly sooner. $WSG will net around $388 million, most of which will go to pay down debt that $WSG already have.

It’s been a year of losing value

I’m an investor, I own just a few shares I bought late last year when it became obvious #WSG would have to sell their Ironman Group.

As a triathlete though, I knew at $8 it was better to invest in myself than #WSG shares. Executives should not get paid bonuses for this sort of share price performance, but they will. Andrew Messick, Ironman CEO and #WSG board member is one of those executives. It’s worth remembering that when entry prices go up for races next time.